alleye pro Mark Martin spends hours studying a few walleyes he keeps in an aquarium at home. "They’ll eat when the lights are on once in a while," Martin said recently at the Masters Walleye Institute in suburban Chicago. "But it sounds like a washing machine after dark."

For the 1990 Professional Walleye Trail champion, his captives’ tendency toward nocturnal feedings confirm something he learned from his grandfather years 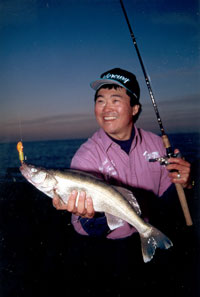 ago - nighttime is a great time to hunt walleye. Experience shows big walleye become more vulnerable after dark because they may feel more secure when they can take advantage of their exceptional eyesight to prowl their watery world for prey.

And, chasing walleyes under the stars may be better for anglers, too - it’s a good way to escape the crowds on heavily-used lakes.

But when is the best time to learn where to look for nighttime walleye?

"In the daytime," said Martin. "You’re going to learn far more about night fishing when the sun is shining than you ever will at night.

"If you think you are going out after dark and use your electronics and a map to find fish, good luck, ‘cause that’s not going to happen. It’s in the daytime you can best learn all the idiosyncrasies of the structure - the points, the sunken islands, the inside turns, the rip rap and how it’s laid in there."

Nighttime fishing is shallow fishing. You are going to be working in 15 feet or less. It’s a dangerous time to learn about submerged hazards. Consider using glow in the dark marker buoys or ones with lights attached to help follow contours when you return later.

Homework done, the real fun begins when the sun goes down. Begin at main lake points that go all the way from the shoreline to deep water. If there are fish on them during the day, even more will be there at night. And, the bigger the structure, the better. Bigger structure holds more fish.

Use your sonar to look for fish. If you don’t see any, move to your second spot, then your third. Keep moving and looking until you find a concentration of walleyes.

"I could have the best spot where I caught 30 fish the night before and go the next night and not see any fish. Most people I know would just go right on fishing it. They fish memories for two or three hours. But I have enough spots that I can keep going ‘til I find them."

Keep your lure 1- to 3- feet off the bottom to detect strikes better. Walleyes bite extremely light at night. If always running your bait right on the bottom or through weeds, you’d set the hook on everything or become complacent and never set the hook at all. But when you know your bait is running free above most obstructions, the slightest tick brings a solid hookset. It’s an instinctive reaction. The rod comes forward even before his brain registers the strike.

Good electronics and the first few fish tell you what depth most walleye are holding. Usually, they are part of what Martin terms a "breakline pileup."

When you reach the end of a structure, continue on a short distance, letting your bait travel out to fish which may suspend nearby. With a transducer on the bowmounted electric to trace

breaklines precisely, troll about 1 mph whether fishing a shallow-lipped crankbait or deep diver. If you feel your lure wobbling, slow down. It should be your arm moving forward and back, forward and back, that imparts the look of a dying minnow. Forget planer boards or snap-on weights - you’ll miss light biters.

A #13 Rapala is the standard; a #18 is the largest. Martin doctors his lures with prism tape on the sides and glow in the dark eyes. It’s a trick learned from hours sitting with the lights turned out watching the action in his aquarium tank. Even his human eyes - far less sensitive than a walleye’s - can detect the faint flicker of dim light reflecting from the sides of a minnow.

Attach hard baits to the line with a cross-locked snap to achieve the best action with the exception of short-lipped lures, which he ties on directly. Use two #5 split shot or three #7s split shot a couple feet in front of the lure to achieve maximum depth. Don’t be afraid to use heavy line. It won’t spook the fish and you can pull most snags free without break offs.

When’s the best time to catch nighttime walleye? All night long. But it’s going to peak when the moon is rising or setting. "If you aren’t catching fish when you see that happening, go back to where you caught your last one. Then, they are really going to be popping." Martin’s grandpa taught him that. Must be so.

This article reprinted courtesy of Ted Takasaki. You can read more of Ted's work at his web site at:www.walleyecentral.com/takasaki