Ken, Amy, and Tyler had jumped in my boat for the second round of fishing yesterday. They have never trolled with inline planer boards before, so it was a quick lesson setting the baits out with the snap weights and Off Shore boards. Ken’s son Tyler caught on very quickly, and was left to set lines on his side of the boat while I showed Ken and Amy how to do it on their side of the boat. As usual, women only have to be told once how to do something, and Amy had it down pat. Ken, on the other hand, who I would find to be very entertaining throughout the day, needed a more watchful eye. lol (I say that in jest….he did just fine, but was fun to pick on, because he was picking on me!)

I don’t need to tell you the program, because after a successful first trip in the morning, we didn’t change anything.
We headed right back to the NW corner of Kelly’s and set up. We picked up a fish shortly after setting lines and they had their first walleye in the boat. We trolled around for awhile, and picked up three more in that area, before I decided it was too crowded in the area now, and I wanted to go find another spot without any boat traffic.

We picked up lines and headed to the south passage between Kelly’s and the mainland. After finding some dirtier water, the marks on the Onix lit up. The kind of marks that are big and fat with red and yellow in them. HOGS!

We set lines again, and trolled a west to east heading. We only got one going that direction, but when we turned and headed northeast, we got two quick fish. Finishing out the turn to head back into the current from and east to west heading, we proceeded to pick up two more fish, and now had two out of their three man limit. We finished out that east/west pass and made a turn to the south again, to head east. We trolled along, and again, it was slow going that direction.

A group of perch fishermen were heading right towards us, and finally figured out that we were trolling and got out of the way. As they passed us, we could hear them talking, and one fella figured we didn’t know what we were doing and kept saying, “Those fish are right below them”, and laughing. So, I opened the livewell and lifted up two big eyes and showed them what we had….that pretty much shut him up after that. And, the lady that was with them, laughed at him. lol

I kicked the speed up to 1.8 heading east with the current, because I figured the baits weren’t getting the action they needed to attract the fish. As soon as I did, we hadn’t gone 50 feet before the next fish was on….in sight of “Mr Big Mouth Perch Fisherman” too. hehehe

Ken caught a 32 inch walleye that he plans on having Jim McEwen mount for him. If you read my blog from two years ago, Jim is the one who gave me an eye from a trip we did, and his work is just amazing. I’m sure Ken will love the fish mount Jim does for him too.

We finished out their three man limit and headed in. Jim and Renee were waiting for their friends, and we loaded out. Ken informed me that he didn’t have a cooler in his car (WHAT??), so after giving him some lighthearted ribbing, I drove the fish over to Bay’s Edge to drop them off for them.

We said our goodbyes and I waited for my crew from yesterday to arrive there. I had told them of the bite in the south passage, because they still needed a handful of fish to finish out their limit, and they did so in quick time, and wanted to buy me lunch again for helping them. I never turn down an invite to a good restaurant! We hit Ciao Bella this time and had a nice meal.

After lunch, I said my goodbyes to them and Chris said he would email me this week to book next year’s trip already, and that made me happy.

This has been a great week of fishing, fun, and great customers who I consider friends now. It doesn’t get much better than that.

Today is a blow day for me, so I’m off to Cabelas in a little bit….

Tomorrow’s trip is going to be a later start in the morning, to let the winds die down. My customers are repeats who have fished with me about a dozen times now, so I’m really looking forward to it. I hope this cold front doesn’t affect the bite. We shall see…. 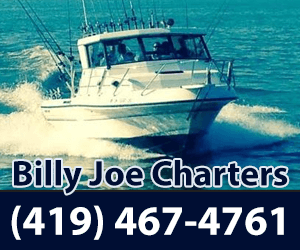