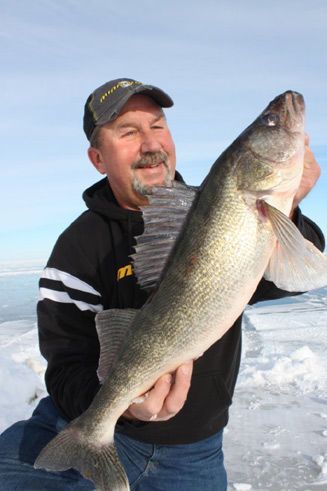 The venison is neatly wrapped in butcher paper, labeled and squirreled away in the freezer; the orange outfit retired for ice fishing bibs and slip-on cleats. In a perfect world, there’s little snow and good, clean ice is forming throughout the Ice Belt.

Whether you call ice fishing’s honeymoon phase “early ice” or “first ice,” one thing is certain: it’s hard to beat, especially for walleyes.

Grand Rapids, Minnesota-based guide Tom Neustrom encourages anglers to hit up fall walleye spots during early ice – could be deep, shallow or somewhere in between. Simply, if you caught walleyes there in October or November, chances are they won’t be too far away.

“Typically, walleyes move to deep-water structure in the late fall – points, islands, steep breaks, deep weed edges – so that’s always a good place to look. But don’t limit yourself to textbook spots and traditional wisdom. This October and November, I was catching walleyes shallower than usual in 8-14 feet” says Neustrom.

To ensure he can put clients on fish from day one of ice, Neustrom does a fair share of late, open-water scouting.

“I use my Humminbird 999ci HD SI to locate structure and fish in late fall, setting waypoints for first ice. Pop a blank SD card into the 999, save the waypoints to the card, transfer the card to the 688ci HD Ice Combo and save the spots to the machine. That way I can still use my LakeMaster card, too.”

One of the great things about late-fall walleye fishing is the great day bite. But during first ice, that’s not always the case.

“There can still be sediment in the water from the wave action of fall, which definitely extends the bite window from morning into afternoon. Same goes for darker, more turbid prairie lakes or the bog-stained, tannic waters of the north. But if the water’s clear, low-light periods are best; I’ll choose to fish early morning or the last two hours of afternoon into evening.”

Two other significant factors are ice thickness and snow cover.

“Be quieter during early season – the ice is thinner and transmits more noise. Second, If you have clear ice, it’s going to be hard to sit in 6 or 7 feet of water and catch walleyes. Combine the two and it can be really tough, so I like to scout out spots where there’s snow pack and decreased light. Cloudy days can help tremendously, especially on shallower or clear waters.”

In terms of location, Neustrom says anglers can hedge their bets by fishing around the edges of still green weeds, like cabbage.

“Green weeds produce oxygen and attract life. You’ll find the whole food chain: micro-invertebrates, baitfish, panfish, predators … The cool thing about that is you get a mixed bag. You might pick up walleyes during the low-light periods and panfish and pike during the day. Great place to set up shop with the family,” says Neustrom.

Once again, Neustrom typically has a slew of waypoints set before stepping foot on the ice.

“In fall, I like to scout with Side Imaging to find large weedbeds, setting waypoints all along the edges and any pockets, funnels or points in the weeds. Then I motor over and verify my marks with 2D sonar. If the water’s clear, I can tell if the weeds are still green. Or cast into them, intentionally snagging vegetation to get a closer look. An Aqua-Vu underwater camera also works wonder for scouting weeds.”

Neustrom confides the weed-program is an ace he keeps up his sleeve for trips with clients.

Given Minnesota’s two lines per angler regulation, Neustrom says jigging is his core program, although he’ll stack the odds by using a nearby tip-up or dead stick. He fishes aggressively with a single tip-up by drilling eight or 10 holes, moving the rig hole-to-hole every half-hour or so.

“I treat the tip-up like a ‘silent partner’ that I can move around to test new waters – shallower, deeper, on an inside turn, whatever. It’ll tell me pretty quick where I should move to jig, too.”

Neustrom’s preference lies with traditional wooden rail-style tip-ups for their reliability and ease-of-use.

“I also like to use heavier test braid, which doesn’t get tangled as easily or cut and freeze into the ice. For pike, I prefer 60- 80-pound; for walleyes, 20-pound, something like Sufix 832. Then it’s a small barrel swivel and an 8-pound fluoro leader for walleyes or a 20-pound fluoro leader for pike. Hook size all comes down to the size of your bait, but I tend to go smaller with hooks wherever possible for walleyes. This minimizes the tendency to reject and spit the bait.”

Neustrom is also fond of adding a small glow bead above the hook, which he says can make the difference in some situations, especially darker waters.

“One of the biggest mistakes anglers make is letting their bait get too wild. Position the right size and weight split-shot on the leader to act as a fulcrum to pin the bait and define a strike window. You’ve gotta remember, a fish’s metabolism slows in winter. If that bait is freaking out, swimming everywhere, the fish might just decide it’s too much work for the calories.”

Another mistake Neustrom says walleye anglers make is not maintaining their tip-ups.

“Always check the trip mechanism and make sure line flows easily off the spool. Too much resistance—or split shots that are too heavy—and that walleye’s going to spit the bait.”

Another flaw in most anglers’ tip-up programs is what he calls “operating distance.” In other words, don’t position your ‘silent partner’ too far away.

“If I’m using a dead stick, I like it pretty close to me, like 10 feet or closer. The key is to respond quickly rather than chase it down. Same thing for a tip-up; I rarely set them more than 10 yards from where I’m jigging.”

But Neustrom says he still catches the majority of his early-ice ‘eyes actively jigging.

“A Jigging Rap has a wide swing that most ice baits just don’t have. Plus, it looks like a baitfish to attract fish from a distance and also displaces a lot of water, which walleyes can feel with their lateral line. Most of the time, you’re getting hard aggression bites. It definitely brings out that kill instinct. Sometimes I’ll add a scent component, too, by adding a minnow head to the center treble.”

For anglers new to the Jigging Rap game, Neustrom suggests a small assortment of baits in the #5, #7 and #9 categories.

With respect to color, he suggests starting with something that resembles the prevalent forage base of where you’re fishing.

In terms of rigging, Neustrom attaches a small barrel swivel to 8-pound mono main line and a 12- to 24-inch 6-pound Sufix fluorocarbon leader above the bait to combat line twist. He likes the addition of a Fast Snap or Quick Clip to attach the Jigging Rap.

“If you’re spooling your reels with mono, use something soft. I like Sufix Elite, which is a little softer than a lot of lines. In the winter, we’re often using reels that have a smaller spool and it’s a tighter fit, which leads to more line memory if you’re not using a soft mono,” says Neustrom.

Then, for waters 20 feet and deeper, Neustrom prefers braid for added sensitivity and its low-stretch characteristic, which provides quick and solid hooksets.

Although many anglers prefer a longer rod for fishing Jigging Raps, Neustrom sticks to 28 – 32-inch models that he can still fish in a portable shelter, typically medium-action with a little bit softer tip.

“When I’m fishing deeper I’ll move to something with a little more backbone so I can get a better hookset,” says Neustrom. “Obviously, you can go longer for fishing outside.”

“First, make sure to check ice thickness to ensure safe travel whether on foot or an ATV. Be especially mindful of areas with current and don’t get too brazen; no walleye is worth your life. I look for 4 inches before fishing on foot and 5 inches for ATVs. And by the time we have the foot of ice needed to sustain a truck, we’re moving from early-ice into mid-winter strategies.”

Fish with Tom this winter in the Grand Rapids, Minnesota, and the greater Itasca County area: http://www.mnfishingconnections.com/ or call 218-327-2312. 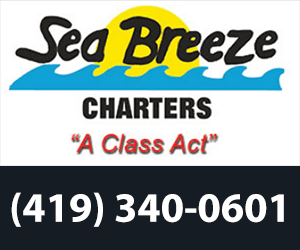